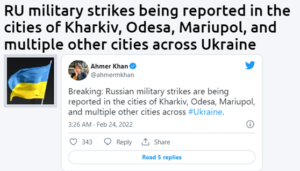 What impact is this having on the markets?

Why do these assets gain strength during these times? The Japanese yen and the Swiss franc for example, are considered a safe haven assets, but why?

“The Swiss franc has remained a very attractive safe-haven currency, especially during times of market turmoil, mainly due to the stability of the Swiss government, as well as the very stable banking and financial system in Switzerland. The economy has a very low debt to GDP ratio. It also has a current account surplus, and it has largely maintained political neutrality, which means that is often unmoved by many of the foreign affairs, compared to some of the other developed economies…

Now, turning to Japan, the country also has a current account surplus, just like Switzerland, which means that it exports more then it imports, but the economy is not one that one would normally consider as being a safe-haven, as the country has a very high level of debt, basically sitting at almost 250% of GDP, and has been struggling with low inflation for the last couple of decades. Now, what makes Japan’s debt very different then other developed economies, is that most of their debt is held internally. Now that means that Japan is basically the world’s biggest creditor nation, meaning that it owns a lot more foreign assets then what it owes. There’s also some other reasons why the Japanese yen and the Swiss franc often appreciate during risk of flows, and that has to deal with the very low interest rates from both currencies… Thus, when the market turmoil hits… you’ll often see a very big repatriation of Japanese yen and Swiss francs… and a lot of outflows in your high beta currencies, like your EM currencies, as well as your more classic high betas, like your Aussie, your Kiwi, and your CAD. So that is some of the main reasons why the Swiss franc and the Japanese yen is considered safe-havens, and in terms of the attractiveness as funding currencies, why we often see them appreciate during times of risk-off, and depreciate during times of risk-on.” Source –https://financialsource.co/

You can find out more about which cookies we are using or switch them off in settings.

This website uses cookies so that we can provide you with the best user experience possible. Cookie information is stored in your browser and performs functions such as recognising you when you return to our website and helping our team to understand which sections of the website you find most interesting and useful.

Strictly Necessary Cookie should be enabled at all times so that we can save your preferences for cookie settings.

If you disable this cookie, we will not be able to save your preferences. This means that every time you visit this website you will need to enable or disable cookies again.